Nia's little twin brother, Toa is practically her polar opposite in every way. An optimistic fashionista who's super social, he does all that he can to support his sister in her idol career, from making clothes for the two of them to even being her pinch-hitter when she can't go on. Sweet as he may be, it's best not to get on his bad side, or you might find yourself facing the sharp edges of some very, very big scissors.

In this game, he wields the green tear lapis.

Hatcha Metcha Party by kors k is his song.

Deceptively important to the story with quite a powerful lapis; although his initial role was making a replica of Jadeite's cloak so (unbeknownst to him) Retsu, Rinka and Hiumi could sneak into his office. After a not-so-brief bout of getting brainwashed by Lapis Origin for its goals of remaking Lapistoria during the climax, his lapis and Nia's end up being the only ones left in all the world, everyone's last hope of getting back to the Pop'n World. The only caveat, though, is that they wouldn't be able to go back themselves. Although he and Tsugidoka offer to stay behind with Nia, she takes his lapis and sends them all home without her...

He shows up in at least 2 side stories, one as a quick cameo as he crafts a Santa outfit for Fuga to wear (the context is a litle complicated), and another (a card story) as he disguises himself as Nia since her anxiety wouldn't permit her to go on stage. ...Shenanigans ensue from the latter scenario.

how has he not frozen to death with the clothes he wears?
please toa honey make yourself a sweater...
he got redesigned for my art too

This dude is so gender that Rinka and Retsu didn't realize he was a dude. I want what he has. I envy him so goddamn much. I love him. I want to give him a hug. My feelings towards Toa are too complicated for you mortals. Goddamn. 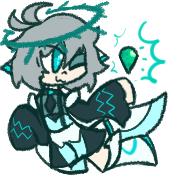